We love hosting people on the HUNTS course every year. This year Alice Sanders was one of the attendees. Here’s her experience of the hunt.

It’s almost impossible to sum the HUNTS course up in an A4 piece of paper given the vast experience and how much I love a yarn but I’ll try. 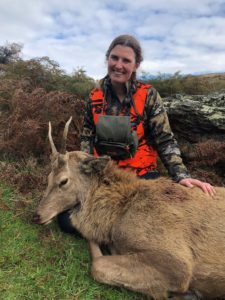 Having previously spent a bit of time in the hills  and being successful on a couple of animals already my goals for doing the course were perhaps a little different than those of others.

I have been taught predominantly by one hunter so I wanted to learn from other people and get their perspectives as well as getting really comfortable behind a firearm. Even though the aim is always to take an animal cleanly first shot, having done that a few times it isn’t that conducive for getting used to cycling rounds etc.

The first day of HUNTS dawned very wet and wild which actually seemed to become quite a theme for the whole course. It became clear on the first day that there was a vast range of experience within the group and a whole heap of names to learn.

I am not going to go through the whole Course as we all have lives to get on with so I’ve narrowed it down to a few highlights and learnings I took away.

Any time on the range I really enjoyed. I learnt so much about positioning behind the rifle and just the repetition of shooting gave me real confidence behind each shot I was taking. In particular the couple of out of Course sessions I had down at the range with Murray, John and Tony respectively were incredibly helpful.

The river crossing day. This was when the group really started to bond. Nothing like being tossed in a flowing river in a thunder storm with a full pack on to really get conversation flowing. I do a lot of tramping but I have never actually done a course on what to do in real time, so though I had the concept in my head, this really solidified that I could save myself if needed. It was also the first time the girls managed to coax some of the lads to join us for a beer. Kudos to Jamie and John for being so brave!

The final hunt. This was obviously one of the highlights of the course for everyone. Being able to hunt Glen Dene station and camp there for a few days was epic.

The Friday night was pretty low key with a lot of bravado being thrown around -mainly by me (sarcastically of course) but the weather coming in soon got us tucked up in our tents.

I was lucky enough to be paired up with Tony Higgins as my guide and I have to do a massive shout out to him. He was an incredible guide and really had sussed out what I was about and what I needed from the course. This turned out to be, doing everything myself so I can get straight into it after the course.

Obviously this took some time but he was incredibly patient. We also hunted with Will Nicholson (HUNTs course), Mark Sanders and Nicky Davis.

It was an epic team, in fact will always be known as “Dream Team One” with a wiggle dance.

We hunted a block within the Wanaka Faces and I was first behind the rifle looking at a very big fat spiker at around 9:00am. It was about a 155m relatively clear shot and seemed like it was just a wait for him to turn broadside sort of game until some fog rolled in just as he was turning!

Never simple. However it only held for a few minutes and then I was clear to take the shot.

He was down in one which I was pretty stoked with, but caused some confusion for Will who was watching the wrong deer. I won’t repeat what was said but it’s ok Will – I forgive you!

Processing – Since it was so early in the day it was decided that the gutting process was going to be done by me. Which was about 2 hours that the team will never get back!

The process was not helped by the fact I am left handed so I do everything backwards. But it was great to get the full gutting process done- from pizzle to backpack construction.

Then came the hilarious session of trying to stand up with the deer on my back. Thankfully I have a minute and a half video to relive those massive faceplants and hitting myself in the face whenever I want.

No better motivation to get to the gym though!

That evening we did a skinning session which I got to be very hands on with again, and butchering the next day which proved with a massive animal like mine, meat fatigue is a very real thing!

Aside from the hunting the real highlight for me was the people on the Course and taking the Course. The girls started bonding pretty early on and were having dinners pre-night classes.

However by the time we had spent a month together in some more trying situations the boys were slowly warming up to us.

Then by the end of the final hunt well the bonds were well and truly set.

I hope that we manage to keep in touch and get out into the mountains for some hunts in the near future.

I would definitely encourage anyone wanting to up their skills or to just start hunting to take on HUNTS next year.

The wealth of knowledge within the guides and the generosity they showed us with their time and ability to answer any question is second to none and I just don’t think you would get that anywhere else.

Thanks so much to the instructors and everyone who took the time to share their knowledge with us.

We are forever grateful.