This hearty venison stew recipe is perfect for those cold winter days and can be done on the stove as Jamie’s Recipe suggests or I have created the same dish in a good old slow cooker – on low for 5-6 hours does the trick. Using the stewing meat part of the animal -often the bit people don’t know what to do with – this dish slowly cooks away (breaks down) the meat’s connective tissue resulting in melt in the mouth venison. 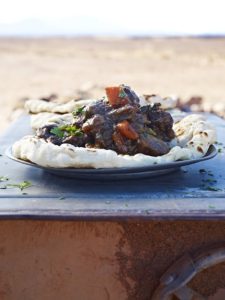 As Juniper berries only grow in the Norther Hemisphere, down South here we either use imported dried berries (equally as good) or try a substitute like rosemary, bay leaves and I love lavender with meat. Give it a whirl.

Junipers are coniferous trees and shrubs and there are an estimated  50 to 67 species of junipers widely distributed throughout the Northern Hemisphere, from the Arctic, south to tropical Africa, from Ziarat, Pakistan, east to eastern Tibet in the Old World, and in the mountains of Central America. The highest-known juniper forest occurs at an altitude of 16,000 ft (4,900 m) in southeastern Tibet and the northern Himalayas, creating one of the highest tree-lines on earth. A juniper berry is actually the female seed cone produced by the various species of junipers. It is not a true berry but a cone with unusually fleshy and merged scales, which gives it a berry-like appearance. 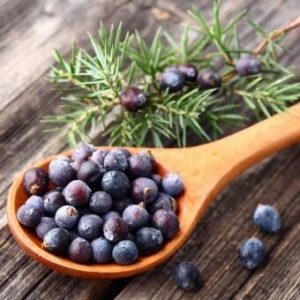 “The Navajo (1) love their lamb and mutton, but back in the day – at the right times of the year – they’d also get out there and hunt things like elk, which they’d stew with wild juniper berries. What’s amazing for me is that thousands of miles away in Britain we were hunting deer for venison and stewing that with juniper too. I guess some combos are just brilliant, no matter where you live. Don’t worry if you can’t get venison, because stewing beef will also be delicious. Really nice served with some rice, beans, a jacket potato or flatbreads, or, if you’re a bit more traditional, some nice steamed greens. A humble but delicious stew.”

(1) Navajo, also spelled Navaho, is the second most populous of all Native American peoples in the United States, with some 300,000 individuals in the early 21st century, most of them living in New Mexico, Arizona, and Utah.